remodels • additions • custom homes
our clients say...
"Ventana Construction exceeded our expectations in all aspects of our project…"

"Working with Ventana was a pleasure…"

Visit our resources or FAQs pages for more information on starting a project.

Questions about cost, timing and feasibility? Click here to tell us what you have in mind.

Stay in the loop about Ventana events and news. Click here to view our blog.


Kitchen remodels and bath remodels are often the centerpieces of remodels. It's the place where all those beautiful plumbing fixtures, tile and cabinets come together to create an inspiring place to create or relax. Ventana Construction works with our clients to select finishes that meet their budgets and their aesthetics. 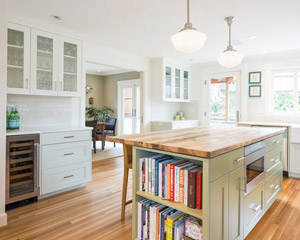 After photos by Cindy Apple Photography

A Seward Park bungalow had been remodeled repeatedly without solving a critical flaw in the main floor layout. An extra hall and some odd closets took up space that was really needed in the kitchen. Reconfiguring that space and refitting adjacent rooms and the bathroom yielded a main floor that is both well lit and private, has a circular floor plan and is a pleasure in which to entertain and cook. Completed 2016.
view project information 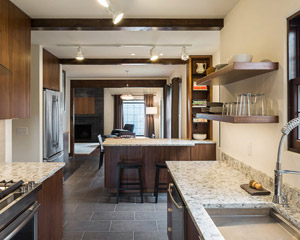 It may be most difficult to plan a remodeling project when you are in the business yourself. You know all of the possibilities that come with a project, and know so much about materials that it can be both a blessing and a burden. A couple who both work in design and fabrication did not let this dissuade them. They carefully honed their scope of work, considered materials, and selected finishes over several years, and their efforts resulted in a finished project that is truly outstanding. Completed 2015.
view project information 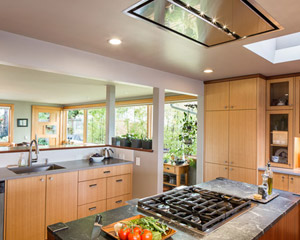 When your taste runs toward custom, and your new home turns out to have kitchen cabinets from a Big Box store installed by carpentry students, you might have an inkling that a remodel is in your future. For a West Seattle couple, that remodel included integrating design elements and wood species from earlier living room and staircase remodels, and the result is really spectacular. Completed 2015.
view project information 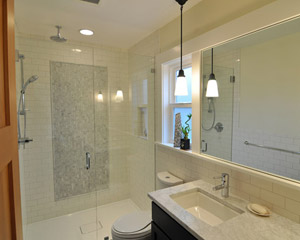 A cozy 2-bedroom cottage near Alki beach was perfect for retirement except for one thing: The main floor bath was not just the master bath, but also the only bath.  A previous remodel had attempted to make this more functional by adding "Jack and Jill" entrances, but it was still less than ideal. The solution was to create a new master bath and closet in one of the two main floor bedrooms, and seal off one of the existing bath doors. Completed 2015.
view project information 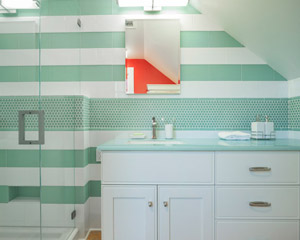 When you work on a home that's more than 100 years old, there are bound to be some surprises. We had built an addition on this home five years earlier, and remodeled portions of it, but what we found in the ceiling of the living and dining room when we remodeled those rooms and the upper bedrooms and baths surprised us all. Completed 2014.
view project information 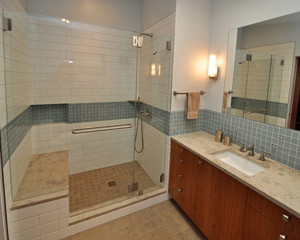 A classic Mid-century Modern home with post and beam construction boasted beautiful Westerly views of the Olympics and a contemporary vibe but had some challenges as well. White was the dominant color, and the previous owner had installed Corian in lots of places--just not a lot on countertops. Additionally, the master suite was short on space. A master remodeling plan was conceived, with the first phase focusing on the main floor. Completed 2013.
view project information 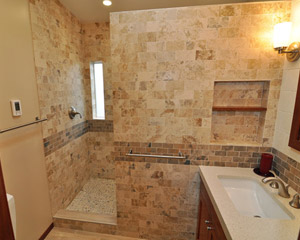 A crowded Southwest-styled bathroom shared by three people was out of place in this 1920s Tudor and short on usable space. Some brilliant design changes transformed it into serene spa-like bathroom that feels twice the size. Completed 2013.
view project information 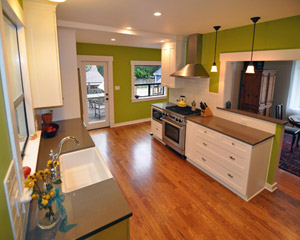 An early 1900s Ballard bungalow has had more than its share of remodels, and not all with stellar outcomes. The original kitchen folded into what must have been a service porch and ended at an added powder room--all with slightly different floor and ceiling levels. The plan was to make everything plane out and modernize the kitchen and bath while keeping the aesthetic of the original home. Completed 2013.
view project information 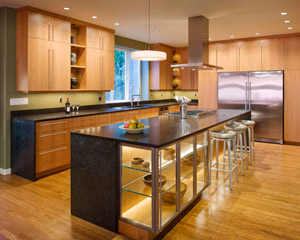 This started out as a pedestrian spec house kitchen from the '90s. A change in floor plan allowed the installation of contemporary cabinets and high-efficiency lighting that wows. Completed 2013.
view project information 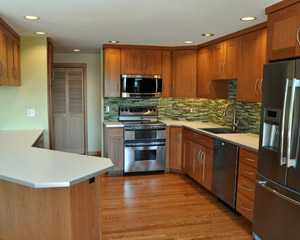 This new kitchen was a long time coming for repeat clients of ours in Des Moines. Years of planning and a strict adherence to budget yielded great things for a kitchen that hadn't been updated since the house was built. Completed 2013.
view project information 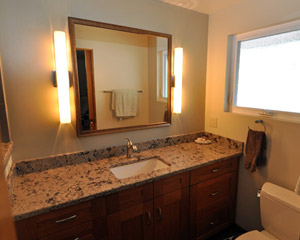 In a classic '50s rambler, the two main floor bathrooms had been virtually untouched since the house was built. The large shared hall bath suffered from tired finishes and cutesy pink tile. The master bath was tiny, and made even smaller by a built-in cabinet that cut into the shower. A complete makeover was planned during the owner's extended vacation, so they were able to return to two completely remodeled bathrooms. Completed 2013.
view project information 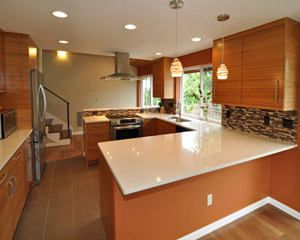 Their kitchen was a magnet for guests while entertaining, but it felt boxed in and with walls on three sides, it isolated everyone in there from the party. That, and the white-washed wood cabinets, vinyl flooring and carpeting everywhere else was the impetus for a main-floor remodel that included the kitchen, all flooring and an adjacent staircase. Completed 2012.
view project information 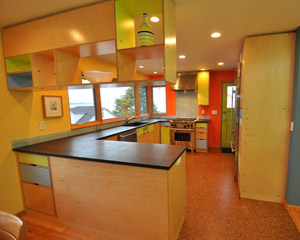 A mid-century brick rambler had all the right stuff: a mostly open floor plan, a partial water view, and good bones. The exception was the kitchen: walled off from the dining area, windows in all the wrong places, limited counter space and an '80s-era remodel that had solved none of those problems. The solution was to go contemporary. Completed 2011.
view project information 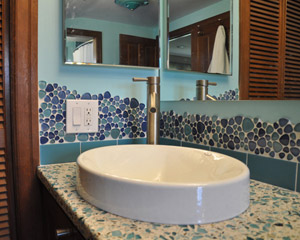 When inspiration strikes, it sometimes takes you in surprising directions. This master bath, last updated in the 80s, was in serious need of inspiration. That emerged with the clients' penchant for color and sense that big change can be achieved even with a small budget. Completed 2011.
view project information 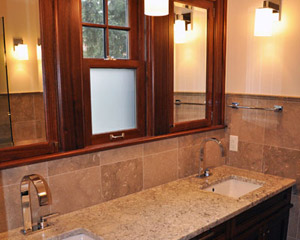 A '40s Tudor in the Mount Baker neighborhood of Seattle had one large ugly bathroom to serve three upstairs bedrooms. The brilliant solution is a double bathroom remodel: by dividing the space in two, there is now an elegant master bath and a spacious kids' bath. Completed 2009.
view project information 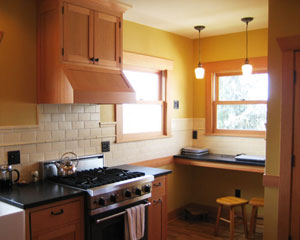 More than a dozen years in this home gave the owners plenty of time to think about how to update it while keeping the period details that they love. This kitchen expansion won the Master Builders Association Remodeling Excellence award for kitchens more than $75,000. A new media room, a remodeled bathroom and a new mantle are also part of this project. Completed 2008.
view project information 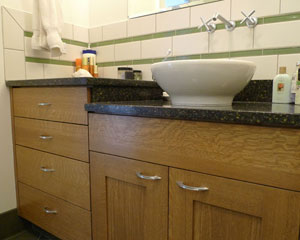 The challenges of a Tudor are many. In this West Seattle gem, the master suite was hemmed in with badly used space, a miniscule master bath and a bank of windows that actually blocked the view. We added walls here, and relocated the master sink to what had been storage. The result is a light and bright space with a fabulous shower and super cool tile. The kids' bath got a makeover too - with sweet blue hex tile in the shower niche. Completed 2009.
view project information