remodels • additions • custom homes
our clients say...
"Ventana Construction exceeded our expectations in all aspects of our project…"

"Working with Ventana was a pleasure…"

Visit our resources or FAQs pages for more information on starting a project.

Questions about cost, timing and feasibility? Click here to tell us what you have in mind.

Stay in the loop about Ventana events and news. Click here to view our blog.


Whole-house remodels and additions to existing homes are some of the more complex projects that we do. They often involve foundation and other structural work, along with an overhaul of the plumbing, heating and electrical systems. Large-scale remodeling projects are also a lot of fun because there's an opportunity for a complete update, expansion and restoration of your home. 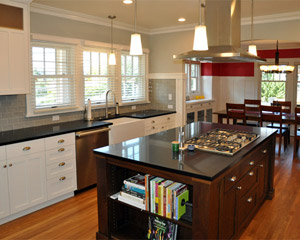 Sometimes a very small addition can make a huge difference. The main floor of this 1920s Wallingford bungalow was dominated by lots of tiny rooms. The dining room was closed off by a door from a dead-end kitchen, while a tiny main floor bedroom behind it was the only exit into the backyard. A 2' addition on that small room allowed it to be converted into a living room that blends naturally into the kitchen space, and provides attractive access into the yard. By opening the wall to the dining room, this is now an open, light and bright space that is well loved and perfect for entertaining. Completed 2017.
view project information 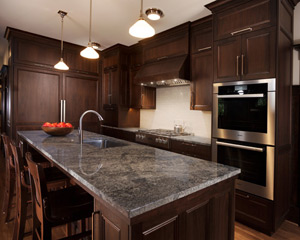 After photos by Rick Dahms Photographer

It all started with a leaky dishwasher. Plans for a kitchen remodel (the '70s laminate cabinets were not the thing for this grand Capitol Hill home filled with fir millwork) included opening the space up to the dining room and a new laundry in the basement. Then two baths, a complete electrical overhaul and more followed, with many unique and custom touches. The home is now updated and is true to its 1909 provenance. Completed 2017.
view project information 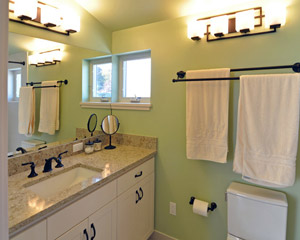 A West Seattle couple faced a problem endemic to the typical architecture of the 1940s. Their solidly built home had a functional first floor, but the second floor was little more than a long, narrow rectangle with low-slung ceilings and windows at each end. The addition of a bath in the ‘70s did little to improve it--in fact, it begged for improvement more than the rest of the space. A desire to create two livable bedrooms and a comfortable bath led to a dormer addition that literally transformed the place. Completed 2015.
view project information 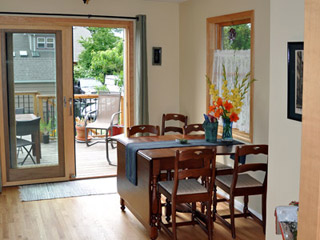 It's the War Box conundrum: cute and compact at 800-900sf, these rectangular homes built in the '40s are the perfect size for a small family, but missing a vital room — a place to dine. See how one architect solved this problem beautifully, and with some added benefits. Completed 2013.
view project information 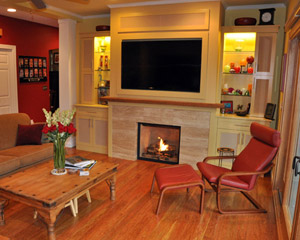 Split-level entries can be tricky. They can either make you feel like you're entering a warren of stairs or they can be light and bright, providing clear sight-lines to open spaces. A '90s spec home suffered from the former, and a solution had nothing to do with the entry or the stairs. It was all about the living room. Completed 2013.
view project information 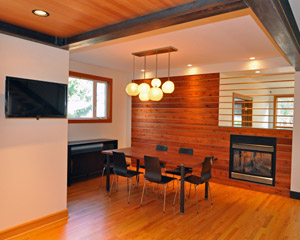 Usually projects involve remodeling one room in its same location (perhaps expanding a bit) or moving it to a whole new location. In this case, one bathroom became a powder bath, a laundry, an office and a TV room in the same footprint. How can that be? Well, wait until you see the bathroom. Completed 2013.
view project information 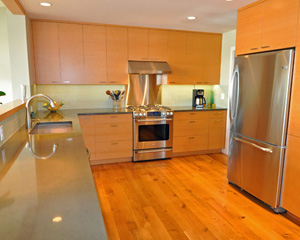 A series of poorly thought out additions to a Brace Point beachfront home left it with awkward spaces, odd and dated finishes, and questionable structural integrity. A new dormer addition and rebuilding much of the beach side of the house solved those problems, using contemporary finishes and taking full advantage of the stunning views. Completed 2012.
view project information 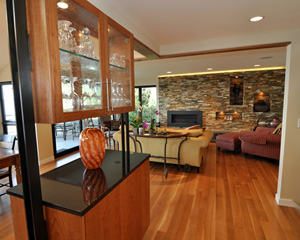 A 3-story Seattle home nestled on a forested bluff with panoramic views of water and mountains. It's a little slice of paradise that unfortunately was stuck squarely in 1985, when it was built. The owners had recently remodeled some of the basement level rooms, but the main floor and upstairs master suite were ready for a major update, along with the exterior of the home. The project included all new windows and doors, metal roof and siding, a tankless hot water heater, and enclosing an exterior deck to gain interior space. Completed 2012.
view project information 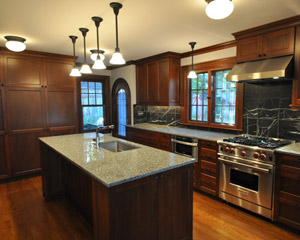 Everything old is new again. A grand brick Tudor overlooking Lake Washington had an unfortunate '70s makeover of its main floor. The new owners were ready to put it right again, staying true to the original 1920s design and mahogany millwork, while adding some modern conveniences. Completed 2011.
view project information 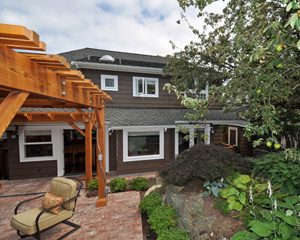 A classic Seattle view home with a classic problem: small spaces upstairs and a main floor with both red oak and fir flooring. The bath had been remodeled recently enough to desperately need another remodel to make it match the aesthetics of the home--that corner tub just had to go. And so it did as part of a dormer and main floor addition and a whole house remodel and refresh of all the finishes. Completed 2011.
view project information 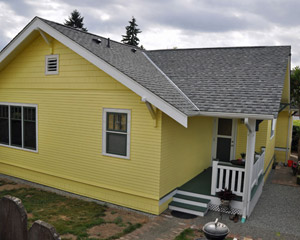 A cozy 1916 Craftsman with a unique curved front porch: how to keep from ruining the look of the house while doing a major addition? Tricky, but absolutely achievable. Completed 2011.
view project information 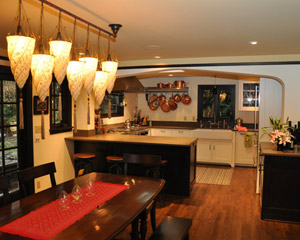 A sweet cottage on the hill above Alki had all kinds of charm but some serious floor plan issues. The kitchen was a long, narrow dead end, and on the other side of the main floor the potential for a circular floor plan was stymied by a wall where there really should have been a door. It was also nearly impossible for the owners to entertain, with a warren of small rooms and no space for a big dining room table. All of the problems were solved with a main floor addition that includes a kitchen and dining room. Completed 2010.
view project information 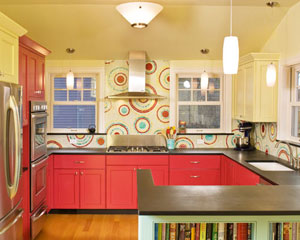 The kitchen is the heart of this home with bright, fresh colors that are contemporary and compelling. Along with the colorful custom cabinets and mosaic tile, this addition for two gourmet cooks includes a light-filled home office, a comfortable guest bath and a double bank of built-in cabinets that masquerades as a hall. This addition fits seamlessly into the original shape of the 1908 bungalow, and conceals super-insulation in walls and ceilings. Completed 2009.
view project information 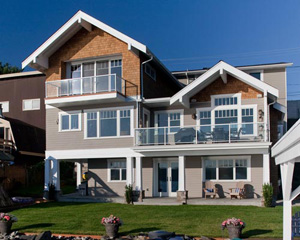 A total transformation of a Lake Washington waterfront home. The original home was pieced together, awkward and dated. We rebuilt part of the foundation, completely remodeled the lower and main levels, put in an elevator and added a new master suite above the left side of the home. The finishes are lovely, the view stellar and the lifestyle relaxing. Completed 2009.
view project information 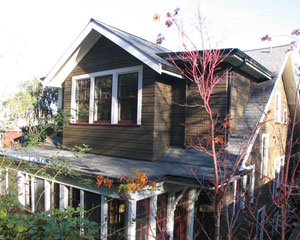 It was a classic Craftsman with classic problems: a previous addition at the rear of the home left it lopsided and diminished its grace.  The brilliance of this addition and remodel is that it restores symmetry by adding a second dormer and bringing out the gable end by several feet.  At the same time, it creates much-needed functional space at the main level in the form of a powder bath and laundry, and a spacious new master suite at the second floor. Completed 2008.
view project information