What’s in Your Walls?

When we open up a wall during a remodeling project on a home more than 50 years old we never really know what we will find.  It’s one of the most vexing and intriguing aspects of remodeling. 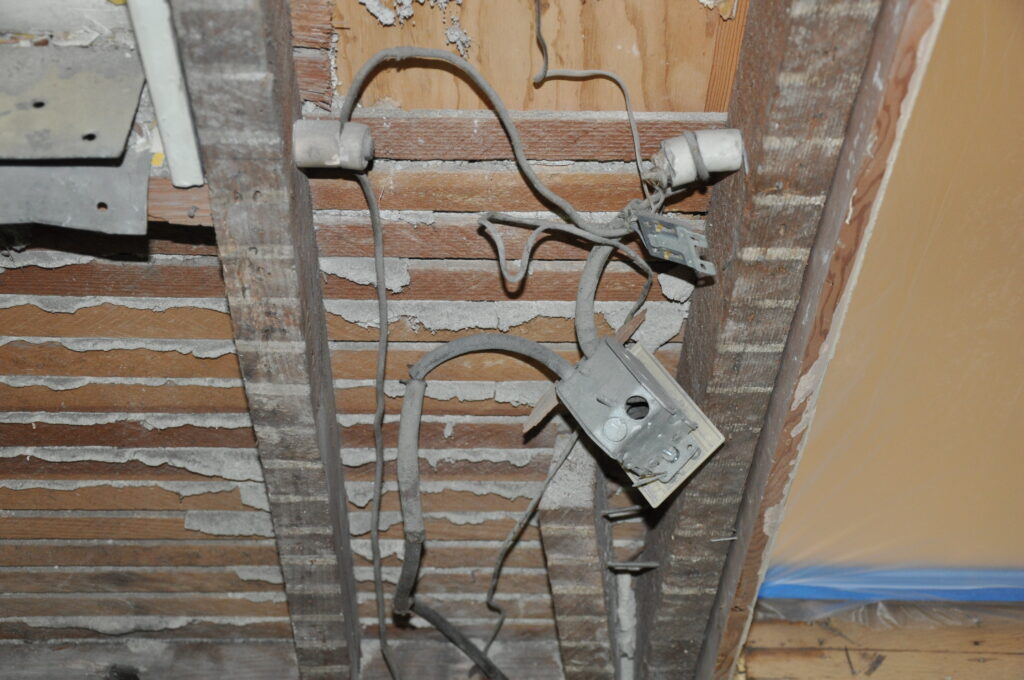 It all has to be cleaned out, and cleaned up, whether with a broom, a hammer and new studs, or an abatement company.   The expense involved varies, though it invariably is named the same thing: Change Order.

Some of those unpleasantries can be generally anticipated based on the age of the home. But there’s almost always something that surprises everyone: the rogue run of power cord buried in the wall, electrical tape covering the connections;

A large rock helped hold up three stories of a home for decades.

the plumbing that would not have passed code anywhere at any time; the rock holding up three stories at the back of a home.  Head-shakers, all.

Those open walls also provide a road map to the history of the home.  It can be entirely evident from the framing where there was once a window or a door, where stairs once ran,

Part of a staircase was buried in the main floor ceiling of a 100-year-old home in Greenlake.

where the coal chute was filled, or where a “natural air” refrigerator once cooled food–sort of.   We have found 1/4 flight of stairs buried in the main floor ceiling of a home built in 1903, like some archeological relic.  All of these are clues to the home’s past, and the relative skill of those altering it–a sometimes cryptic record of remodels, both petty and large.

A 45 rpm vinyl record was found at the top of a laundry chute enclosure on a 1950s home.

Inside the walls there are also sometimes amazing finds.  Sometimes it’s as simple as a scrawled number or measurement on framing lumber, or a glass soda bottle left unintentionally and plastered over before anyone noticed.

Some times what’s buried was put there very intentionally and then completely forgotten: We have friends who remodeled their West Seattle kitchen and discovered a cache of jewelry that helped finance their project.

Newspaper as insulation or time capsule?

At a time when insulation wasn’t commonly installed, many homeowners stuffed their walls with newspaper, or layered it on to try to keep the cold and damp out of their homes. 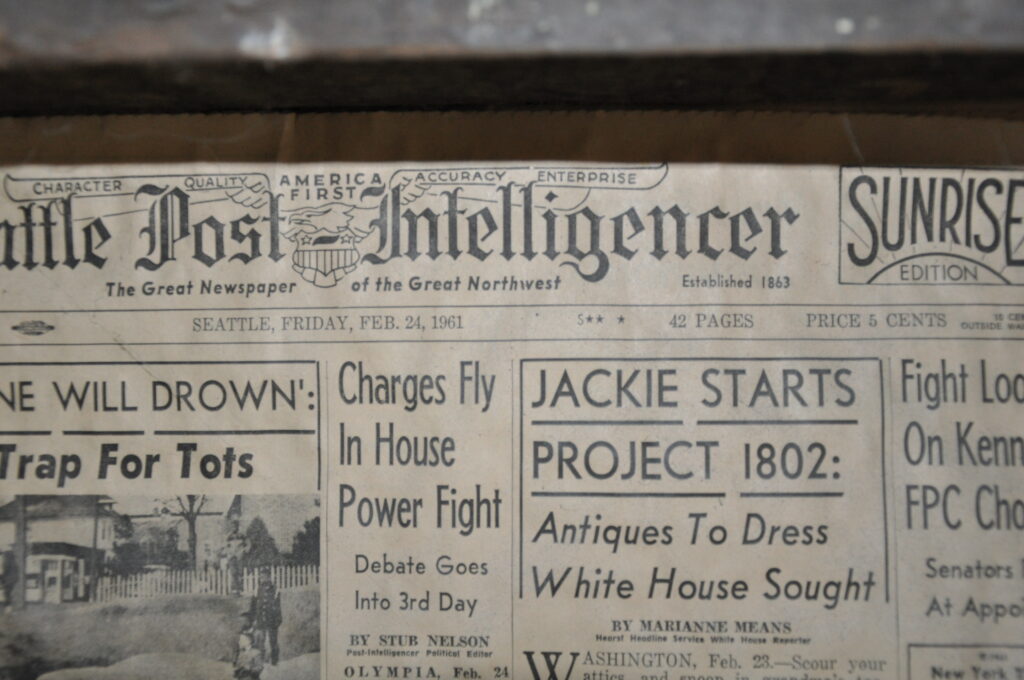 That attempt at keeping their homes warm resulted in an opportunity for us to look back at the news, culture and market-rate prices of yesteryear.

As part of a Ballard kitchen remodel we started in April, the open walls revealed a good share of problematic framing, a false ceiling in the kitchen, and a treasure-trove of newspapers.

The oldest are from 1901, with an article on then-current President Roosevelt and an ad for new white shirts for $1. 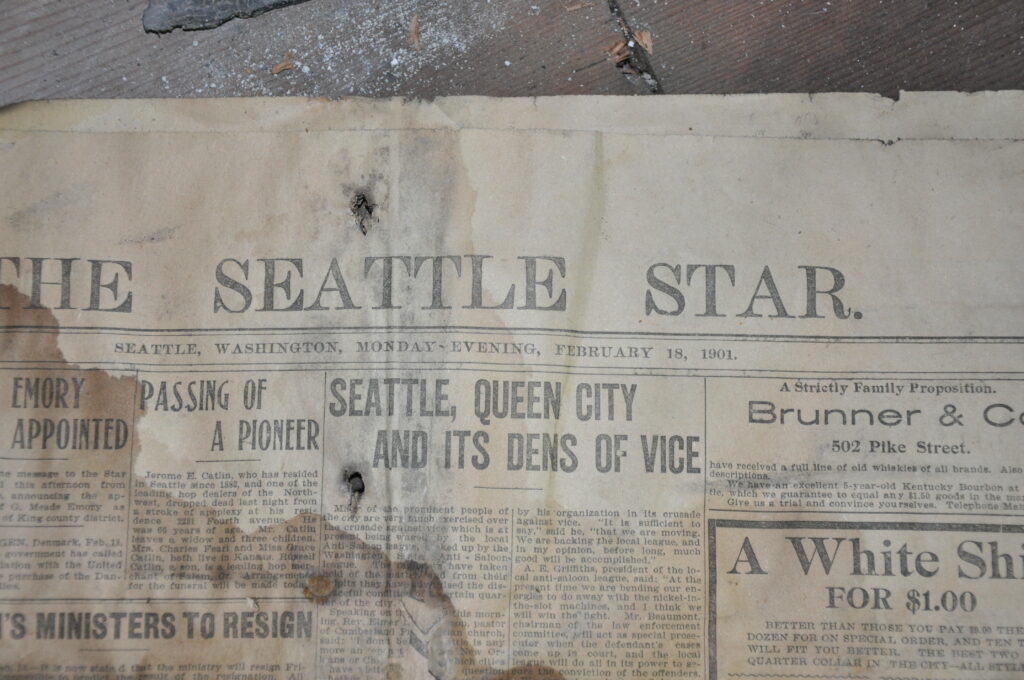 The newspaper, The Seattle Star, was the largest-circulation newspaper of three in Seattle at the time, according to Wikipedia.  The Star was known as the working-man’s newspaper for their allegedly pro-labor stance.  We wonder if this was a paper the carpenters working on the house brought to work and decided to leave there as a time capsule.

There were sadly few dated 1901 in the walls.  The majority of papers were from 1961, and even leafing through those is amazing– the pages in those sections reveal the politics and social mores of the time, along with some eye-opening prices for just about everything.  See several of them here. 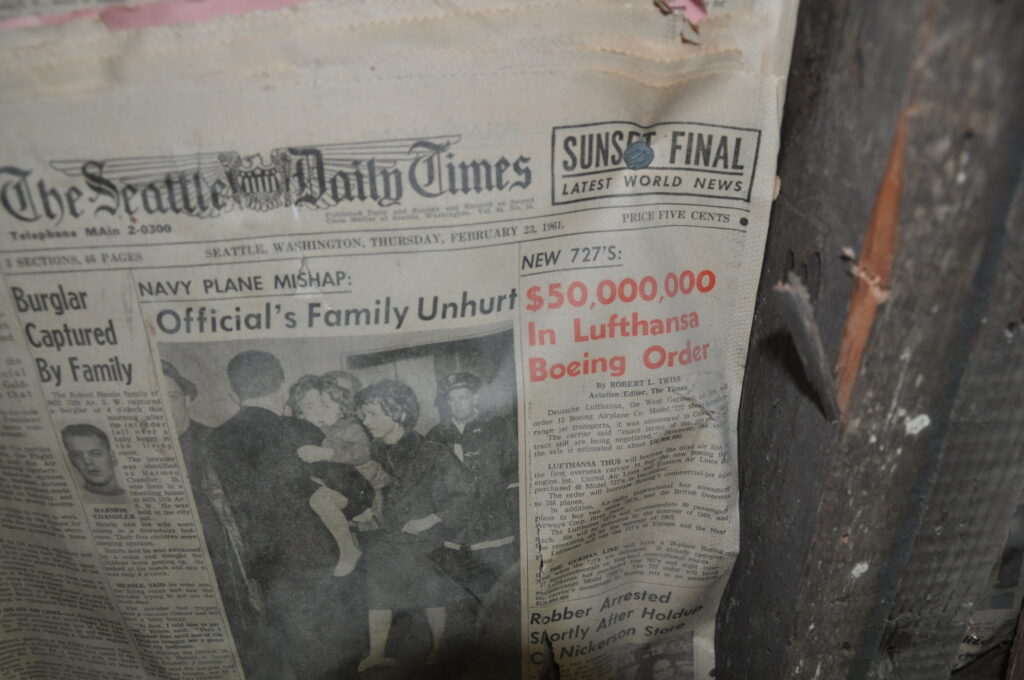 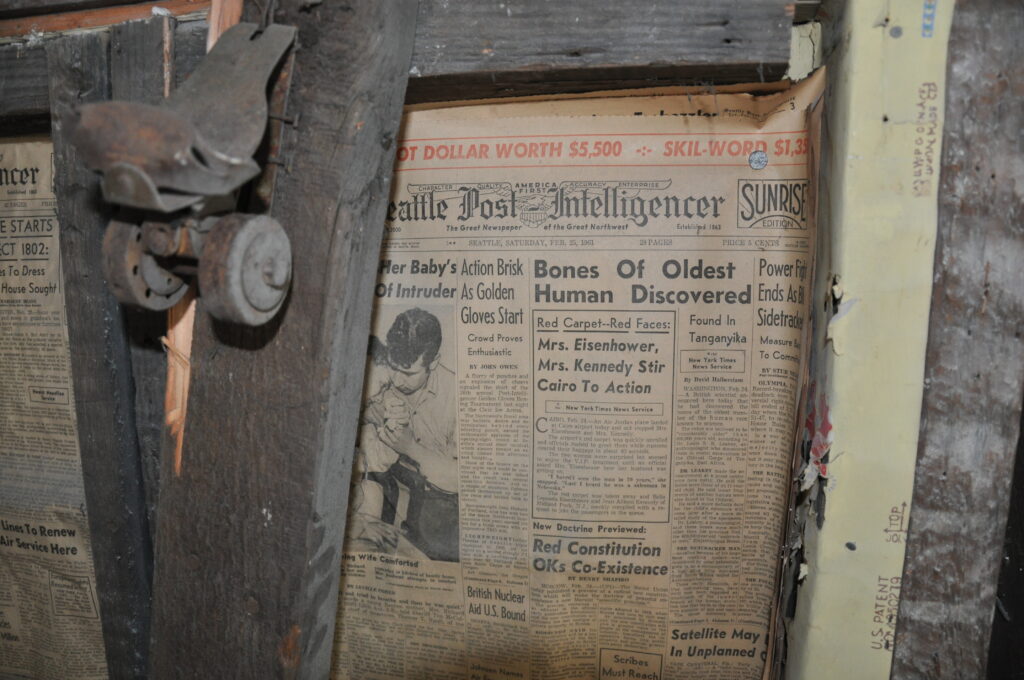 And The Ballard News promises some radioactive results from their advertising… and it must be, with rentals from $65/month and homes available for purchase at $16,800. 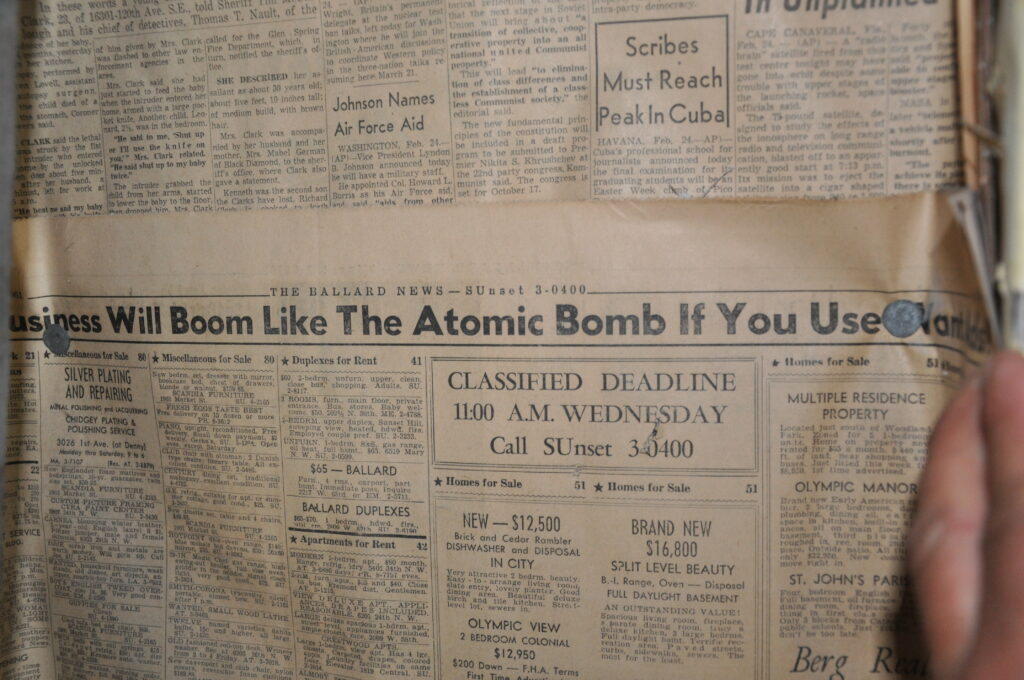 Small-time crime was even big news, with an accused West Seattle prowler making the paper.

By improving your home (and what’s inside those walls) you also have the possibility of seeing a little of its history first-hand and appreciating how far we all have come.

UPDATE June 30:  My Ballard Blog ran short feature on this in late May that caught the attention of KOMO’s Eric Johnson.  He put together a piece on the house and the newspapers, interviewing our long-time carpenter Ramon Santana, and then taking it in a new and touching direction.   The video aired on the evening news June 28th… see it below.

2 Responses to What’s in Your Walls?