It is not that unusual for homeowners to ask whether they can do some of the work on their remodel to keep on budget. 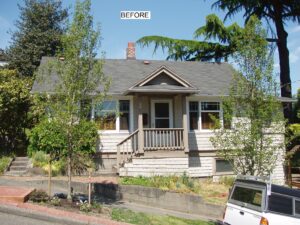 Before the work started….

Whether painting on the back end or doing demolition on the front end, clients often want to bring whatever skills they have to bear to keep costs down.  It is often possible to make this work, though the work they take on is often more than they expect it will be.

We met Steve in 2006 when he wanted to transform his tiny bungalow with a low-head-height basement into a complete home, with a full-height basement and a second story addition to encompass a master suite.  Oh, and by the way, while doing all that work, the main floor bath and sitting room needed to be preserved and protected. 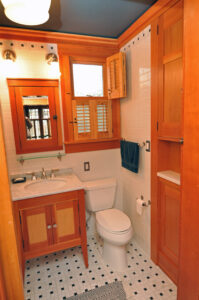 The bath that was protected while the house was rebuilt around it.

The amazing part of this whole plan was that after we finished the concrete, framing and building envelope, Steve would take on the balance of the work himself.   With most homeowners, we might be skeptical.  This represents hundreds of hours of skilled labor.  But we had already seen that Steve was an inventive and meticulous craftsman, the proof in the hand-built wood shutters, and the beautiful finishes in the bath and sitting room we needed to preserve.  There was hope he would prevail… over time… to complete the project. He did that in spades.

Our part of the project was the structural work and the exterior–windows, trim, siding and roof.  In the basement, we dug down several feet, and partially excavated a crawl space, not because any of us wanted to, but because that part of the house had no foundation and we had to form and pour footings before the second story could go on. 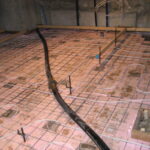 The basement was dug down, then insulation and radiant heat added before the new slab was poured.

Digging down the rest of the basement involved removing the foundation in 4′ sections… every other 4′, and then pouring in new footings and wall to make it flush with the existing wall, and a drainage system behind..  After that, we installed a new slab with insulation and radiant heat tubes. 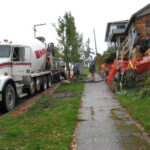 Even parking on the street was difficult because of the slope.

The work was complicated by the property:  tiny and on a very steep lot and street.  I’m remembering there was a day when the crane operator who was to lift over the steel beams– told us he simply wouldn’t be parking there.  We improvised and had our excavator lift and push the beams inch by inch through a window opening to the wait crew.

Much of the plan was based around trying not to rebuild the existing house, including the many structural support posts dotting the basement.  After looking carefully at the main floor system, it became clear it should be rebuilt to make it level. 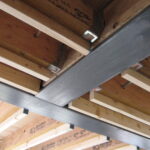 Steel support beams made it possible to remove posts.

We also suggested adding a steel beam to the floor framing system that allowed many of the basement support posts to go away, leaving an open and spacious room.

With a solid foundation in place, the next step was to remove the existing roof system so that we could build the second story.  It was December 2006 and we were using a very large blue tarp to protect the house.  You might recall there was a very large windstorm with hurricane-force winds during Hanukkah that year.

Tarps on the job: the sure sign of construction during the winter in Seattle.

We battened down the tarp with ropes and the tarp survived, as well as the rooms below it.

A few months later, with our work complete, we bid Steve adieu, knowing that he had a lot of work ahead, aside from his full-time job as a research scientist.  Over the next 7 years, he was not just productive, but also amazingly resourceful and creative. 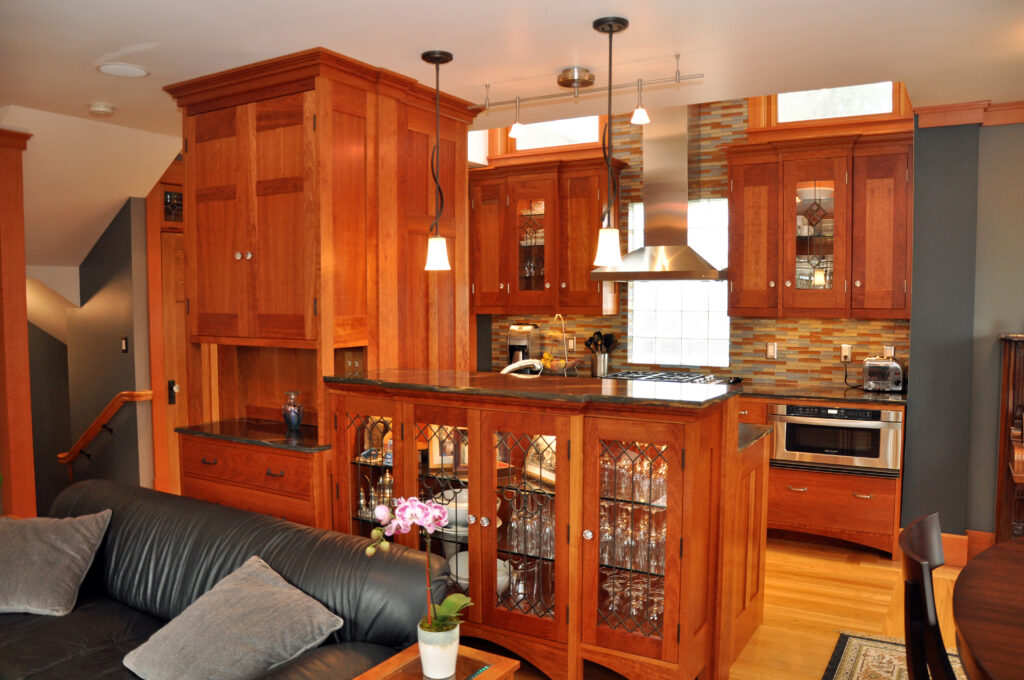 At the main floor, he built all of the kitchen cabinetry, designing it around the nearly 1 1/2 story wall of glass block and windows.  He completed the main floor living room, and reinstalled the original wood shutters. 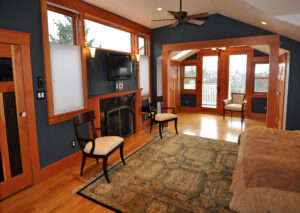 At the upper floor, Steve installed beautiful fir casing, and astonishingly, fabricated doors out of the salvaged old-growth fir flooring that was saved from the original main floor.  The bedroom is large and comfortable, with a gas fireplace, leads out to a landing and stairs doing down to the back yard.

All of the finishes are simple, elegant and beautiful.  They make an inspiring, light-filled place in which to be. 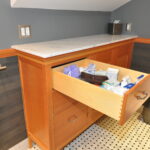 Steve also has an ingenious way of thinking about the function of things.  At the master bath, a side cabinet he built is only about 12″ deep, but when you open the drawers they are easily 18″.  He built the cabinet to recess into the roof eaves to create the maximum depth for the drawers. 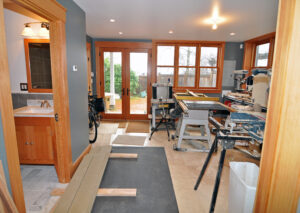 The basement still has Steve’s shop as its centerpiece, though it also has  a laundry room and a third bath that is clearly worthy of more than a basement location.  He is nearing the end of his work now, ready to stop thinking about the next project and instead think about enjoying it.

We feel a kinship with Steve for his devotion to perfection, for his will to finish his project well in every aspect, and for his willingness to take that leap of faith that every remodeling adventure requires.  We thank you for taking us along on that adventure, and for keeping us close these many years later. Congratulations on your beautiful home!

This entry was posted in Addition, Remodel. Bookmark the permalink.