I admit to being a little bit smitten.  Every time I visit a house in Seattle to look at a project, I sneak a peek at the fireplace.  There are dozens of variations on a theme in fireplace surrounds:  brick (natural, painted, even sculpted), wood (usually tying into the mantle with either a Colonial or Craftsman flair) and tile (slate, granite, and more often than not, Batchelder). 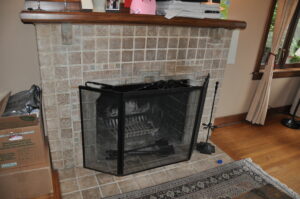 That a tile artisan named Batchelder working in Pasadena, California 100 years ago should come to have such a widespread influence on homes in the Pacific Northwest is at once a testimony to his productivity and an interesting study in architectural trends.

Per Wikipedia, Ernest A. Batchelder, born in 1875, came to Pasadena in the early 1900s to teach.  His career as an academic was forever altered when he built a kiln and started making art tiles.  His tiles became so popular they were installed all over the US, and he became one of the key players in the American Arts and Crafts Movement. 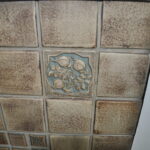 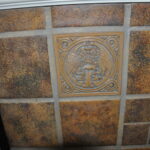 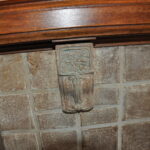 Despite that nice writeup, the information available about Batchelder online is fairly limited.  What is clear from a website about him is that Batchelder was not just an artist but also a man who understood how to market.  He went from making individual tiles to offering tile “catalogues” for fireplaces.  There were complete layouts in an array of options for different-sized fireplaces and hearths.  See link here.  It is almost exclusively these tiles that I’ve seen in Seattle homes.   There’s only one home– in a bathroom–that I suspect very colorful Batchelder tile was used anywhere other than a fireplace. 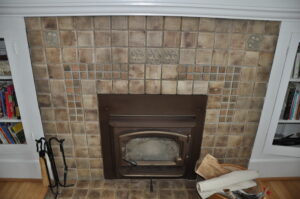 A fireplace surround on 38th Ave SW in Seattle

What’s not clear from the widespread use of the fireplace tile “packages” is whether they became a favorite of the developers at the time, or became a status symbol for homeowners wanting the Ann Sacks tile of the ’20s.  Whatever the reason, Batchelder tile occupies the living rooms of thousands of Seattle homes.

The vast majority of the fireplace surrounds I have seen in Seattle are based on a very neutral color palette, with square brown-beige tiles and motif tiles featuring birds, flowers, and rosettes.  Some of the larger motif tiles show a landscape or larger scene, but all of it is very low-key.

On a recent trip to Pasadena, I was astonished to see the tile floors at All Saints Church in the downtown core.  Here’s a photo published on a WordPress site showing the tile aisle.  It is entirely Batchelder, and an amazing mix of tile in deep, rich color–an almost polar opposite to the more austere tones of the fireplace surrounds of the Pacific Northwest.

That is why, on a recent look at a project in Ballard, I entertained the possibility that a deep blue tile hearth in the same dimensions as other Batchelder tile I’ve seen might be the real McCoy. 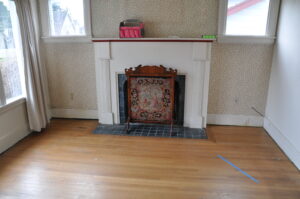 The face of the fireplace is all wood, but could more tile be hiding underneath?

The owners of the property have hired us to build a dormer addition for them, but they took on the interior demolition themselves, so we got to see the answer when they were done.  What they found behind the wood face and mantle was better than imagined:  vivid blue tile, and three hand-painted motif tiles. 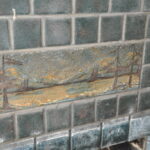 The tiles have some paint on them and some superficial damage but are basically intact–a lovely find and a sweet centerpiece for the soon-to-be remodeled living room. 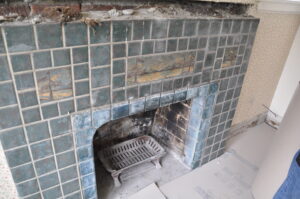 After the demo: a pleasant surprise

Batchelder also offered packages that included stone pieces surrounding the fireplace opening, and the square tiles for the hearth.  The stone pieces made for a more impressive, almost gothic feel, with detailed carvings at the opening, but lack the whimsical feel of the art tile. 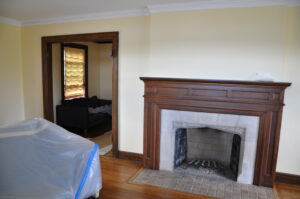 Fireplace surround in the Mt. Baker neighborhood of Seattle

In Seattle, there is even a business devoted to tile restoration and custom tile production, and a search for Batchelder tile on Ebay and the like yields lots of salvaged tile, with the motif tiles fetching the highest prices.

Ernest Batchelder died in 1957, but his art and vision live on more than 50 years later in tens of thousands of homes and public spaces around the country.  Kitchens and baths tend to be remodeled completely without a trace of the original.  Roofs and siding are torn from homes for additions and remodels, and flooring trends come and go.  But the hand-wrought designs that Batchelder envisioned and created defy that kind of destruction.  His unique eye and choice of medium allow us to celebrate and continue to enjoy his art at the hearth, the center of our homes. 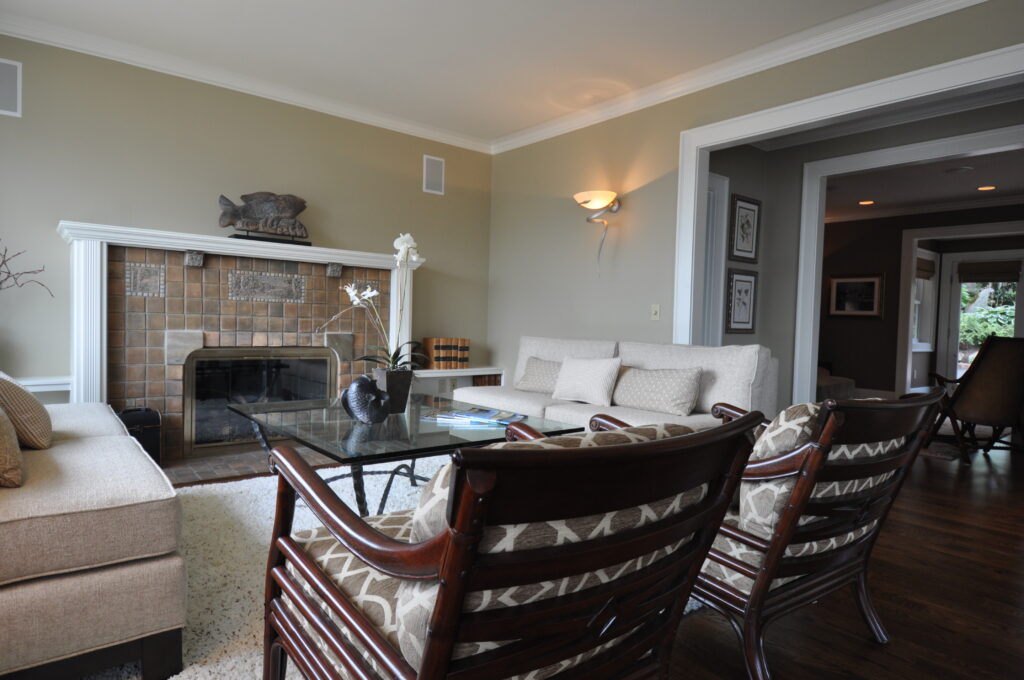 10 Responses to Love that Batchelder Tile