Posted on February 17, 2013 by ventanaBuilds

There are the stayers and the goers. When embarking on a remodel, one of the first things homeowners need to decide is which one they will be. It’s a complicated decision that involves weighing not only the scope of the project, but also costs, inconvenience and whether they have pets and kids in the mix. Read and learn from some of your Seattle neighbors who have taken the plunge and are now enjoying their remodeled homes. 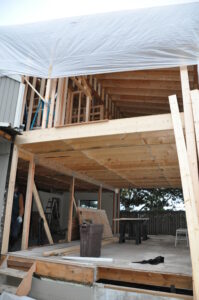 When a large tarp is part of the site protection required, you may want to stay elsewhere during your remodel.

Those who choose to go away, either renting a place or staying with friends or relatives, often do it because they literally have no other choice. In Peter Langmaid’s case, a dormer addition and main floor remodel to his family’s home encompassed about two-thirds of his living space. All of the existing bathrooms were affected, and the kitchen was completely remodeled. He chose to move his family to a rental, which he still considers money very well spent. “Remodeling is stressful enough without adding the burden of trying to stay in the house. Had we been here, there would certainly have been added expense working around us.”

When considering whether to stay or go, consult with your contractor about whether they will add general conditions costs to cover the added expense of having you stay. Things as simple as lengthy daily conversations onsite with homeowners can add up, whether you stay or go.

Gwen Sheridan and her family had stayed at her home on and off through her family’s first remodel of some upstairs bathrooms.  For the second remodel–a major revision the main floor–she could clearly imagine all of the rooms she wouldn’t be able to use. “Not having access to a functional kitchen or a bathroom — that was a big factor for us in deciding not to stay in the house.”  Having a young daughter added to her conviction that their family needed to go. “It was hard to imagine how we’d work around those logistical problems, particularly with a small child.  Moving out for a few months, even with the additional expense, was really the right thing for our family.” 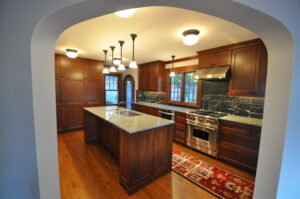 Living without a kitchen would have been tough, so the owner opted to stay away during their remodel

Other families choose to stay, usually in projects that allow them to keep a few rooms undisturbed and a roof firmly in place.  Generally, those families don’t have younger children, and a way to easily keep their pets safe. “We stayed for a number of reasons including that my home is also my office,” says Jennifer Bartlett, a graphic designer who lives with her sister Wendy and their dog Chuckanut.  They undertook a main floor and basement addition in 2008 that included a new home office, kitchen and guest bath.  “I find it difficult to work in new spaces efficiently. Being creative is hard for me in new places,” says Bartlett.  “We really could not imagine not staying in the house.”

Bartlett’s photo illustration of all the frozen food she made in advance of her remodel.

Bartlett and her sister Wendy love to cook, and the kitchen was the centerpiece of their addition.  They carefully thought through how they would cope without a kitchen, and decided to cook ahead. “The remodel was estimated to last 6 months. So I bought a freezer and started cooking. I use containers from Cash and Carry that come in 1- and 2-cup increments,” says Bartlett.  “I cooked for two months before the remodel and made all types of soup and casseroles. I also made a large number of burritos. We froze entrees in vacuum-seal bags. We moved the kitchen into the living room, which functioned as my office, the living room, and now, the kitchen.”

The biggest downside for the Bartletts was not having a kitchen sink. “The second time the table with just-cleaned dishes collapsed and fell down the stairs, my sister lost it. There is just something wrong about doing dishes in a bathroom anyway.”

Wendy Quaale concurs. “Didn’t expect the anguish of washing dishes in the bathtub,” she commented, thought she and her husband Ken were glad to be onsite throughout during their master suite and kitchen addition, despite the dust and noise. Ken has a background in HVAC, so installed ductwork and painted. “It was important to us to be here as much as possible, making decisions.”

Whether you stay or go, remember that your day-to-day routine will change. The Sheridans, who moved out, took few items and clothing with them. “During the weeks we were out of our house, we enjoyed a lot of indoor picnics instead of gourmet meals.”

The same was true for Nancy Stillger, who stayed in her home with her husband and daughter. Their kitchen and exterior remodel took place over a summer, when their daughter was gone for 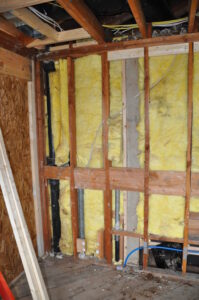 a month and they knew they could grill a lot. “[We moved] large items like our refrigerator downstairs in order to have a temporary kitchen.

Lynn Tutak and her husband followed suit during their kitchen remodel. “We decided where we would make our temporary kitchen space and moved any unnecessary items upstairs. We packed our kitchen up, only keeping a couple of plates, bowls, cutlery, etc. We purchased an inexpensive microwave and electric tea kettle, which have been used every day. We used our gas grill outside and our Crockpot a couple of times.“

Site protection is critical if you decide to stay.  The temporary walls, doors and zipwalls with Visqueen not only reduce dust, but can also keep pets and kids out of the work area. In the Tutaks’ case, their cats were really disturbed initially by the noise and disruptions of construction.  The installation of a temporary door eased that worry by ensuring that they would not escape. 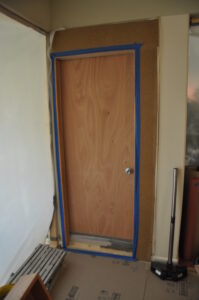 A temporary door kept the cats on the other side while construction was under way.

After that, Lynn says, “We pretty much fell into a routine of “living” in our living room. I was the one who was home during some of the work days and adapted quite easily. However, I did plan ahead. I had projects lined up to work on upstairs in our closets and in my craft room. I did a lot of knitting (Christmas presents) and this worked quite well for me.”

Making a final decision about what’s right for your family during your remodel involves thinking through what’s most important to you, and what kind of disruptions are manageable for you.

But even with smaller remodels, refinishing or adding to wood floors means leaving your home twice for a few days during the project to allow the finish to cure. So even though you’re staying, you still need to leave at least for a few days. 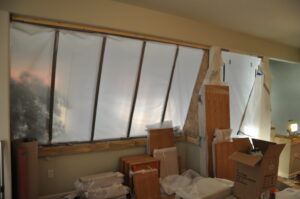 Temporary walls and visqueen can help keep dust down during a remodel.

The Bartletts are taking the knowledge gained from their first remodel and applying it toward the upcoming remodel of their upstairs and living room.  They plan to stay again. 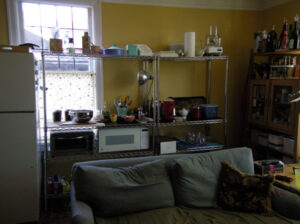 The Bartletts’ temporary kitchen in their living room

“We will plan several trips to our Dad’s and our brothers so we will be out during key times, like when the floors are finished. We are planning on having all the cabinetry finished off site. We are getting rid of some furniture so there will be less to store, but we might still need a storage unit for a short time.”

Planning ahead is key, whether with pre-cooked meals, plans for pets and furniture or taking the leap and renting another place.  The right plan depends on your unique situation.  Stillger, with her newly remodeled kitchen, is satisfied her family made the right call.  “I don’t think there is anything we would do differently.  A remodel has an impact on your day to day life – but the end result is worth it!”